(1) Ecosystems During the Anthropocene 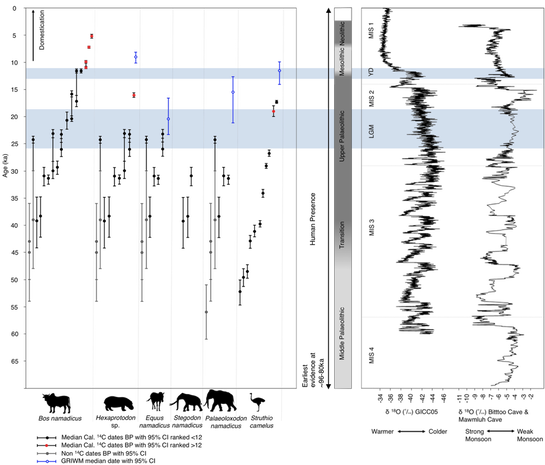 Extinction chronology for six species found in late Quaternary sites in the Indian peninsula.
The causes of the late Quaternary extinction event have been debated for decades. This extinction event, in which several large species were wiped out, has been studied extensively in North America, Northwestern Eurasia, and more recently in some detail in Australia, South America, and Africa. However, we know little about the extinction event, let alone the causes in South and Southeast Asia. It has been suggested that a combination of climate change and human hunting resulted in the extinction.

I have complied the most extensive dataset of dated South Asian mammal occurrences over the last 100,000 years, and am using this dataset to understand patterns of distribution change and eventual extinction. This is the first study of its kind to explore the pattern of extinctions in the Late Quaternary in this understudied part of the world.

In a separate project, I collaborated with researchers from India, Dr. Rajeev Patnaik and Dr. Parth Chauhan, and Taiwan, Dr. H-C Li and Dr. J-P Lin to report on the first and only directly dated specimen of Hexaprotodon from the Indian Subcontinent, it's environment context, and reasons for its eventual extinction.

Image credit: Aniko Toth
Along with colleagues from the Evolution of Terrestrial Ecosystems research group, I am involved in a number of research projects on the consequences of anthropogenically driven extinctions on ecosystems in North America

Caribbean Coral Reefs in the Anthropocene 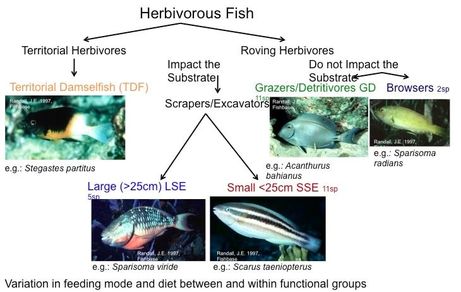 Fish functional groups used in this study
For my masters thesis, I wanted to measure the relative contribution of within functional group diversity and density to ecosystem functioning. I used the coral reef model because of the vast literature on the function of herbivory on reefs and it's contribution to suppressing the overgrowth of macroalgae.

It's been suggested that the diversity of species within a functional group contributes to 1)  the portfolio effect, i.e., the ability for a function to persist even when some species are lost, and 2) complementarity of function, i.e. different species contribute slightly differently to the overall function. However, studies have also shown that the density of functional groups also contributes towards normal ecosystem functioning. I used a large database of Caribbean coral reefs, which included information on the density of individual fish species and the percent cover of macroalgae and coral.

Size-structure of the herbivore guild in the Mesozoic and Cenozoic 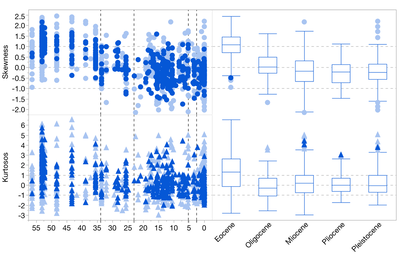 Variation in skewness and kurtosis in local mammalian herbivore size distributions through time.
Understanding how communities are structured and how this structure changes through time are fundamental objectives of ecology and paleobiology. Variation in the shapes of guild-level body-size distributions can help explain how niche partitioning and competition affect patterns of species co-existence and energy flows in an ecosystem. Terrestrial herbivores occupy a wide variety of sizes, making them an ideal system to study how local environmental and ecological processes shape within guild body mass distributions. Working with Dr. Matthew Carrano at the Smithsonian’s National Museum of Natural History, I am analyzing the body-mass distributions of mammals and dinosaurs from well-sampled quarries and bonebeds to determine the generalities and variability in the shape of these distributions through time. This study has three goals: 1) to understand whether the replacement of species through time has an impact on the size- structure of the local herbivore guild and therefore niche space occupation, 2) to compare the assembly of the Mesozoic and Cenozoic herbivore guild to determine whether dinosaur-dominated ecosystems are fundamentally different from mammal-dominated ones and 3) whether there is a common structure to the mammalian herbivore guild irrespective of taxonomy, time interval, or geography.

Body-mass estimation in the Proboscidea 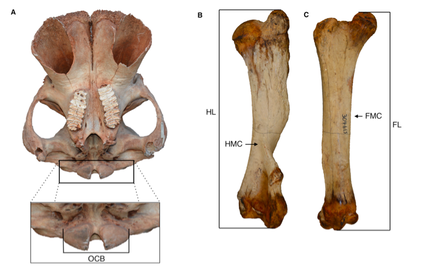 Therefore, I developed allometric equations that predict the total lengths and minimum circumferences of the humeri and femora from the breadth of the occipital condyles. I sampled both extant and extinct species from four families: Gomphotheriidae, Stegodontidae, Mammutidae and Elephantidae, and developed equations for the entire proboscidean sample, and for individual families when possible. 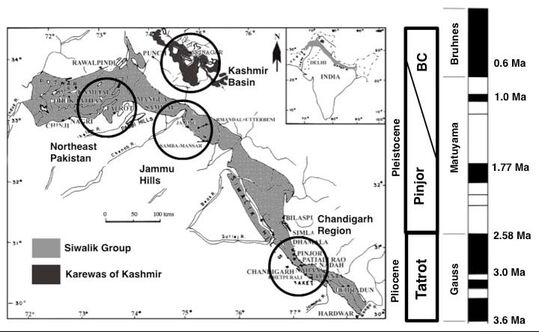 Locator map of the Siwalik Group and Karewas of Kashmir in South Asia with the stratigraphic range of the Upper Siwalik subgroup. The four circled regions represent the four fossiliferous Upper Siwalik regions in South Asia.
The Siwalik Group in India and Pakistan consists of sediments laid down from the middle Miocene to the middle Pleistocene and stretches from the Potwar Plateau in Pakistan to Northeastern India. The fauna from these rocks is collectively called the Siwalik fauna, and elements can be found in the Karewas of Kashmir as well. While the Miocene mammal faunas have been studied extensively, comparatively little work has been done on the Plio-Pleistocene (upper Siwalik) mammals from this group. In this study, using pair-wise dissimilarity indices, I explored patterns of faunal turnover in the Plio-Pleistocene large herbivore guild from the Upper Siwaliks of the Indian Subcontinent. I then used patterns of species appearances and disappearances to understand the processes of immigration and extirpation in driving turnover. I further studied changes in the proportional representation of different herbivore families and changes in the overall body-mass distribution through time to determine whether taxonomic turnover was accompanied by changes in community structure. Finally, I used hypsodonty to determine whether the turnover is consistent with what is expected from environmentally forced faunal change in the context of increasing aridity.

Taxonomy and biogeography of equids from South Asia 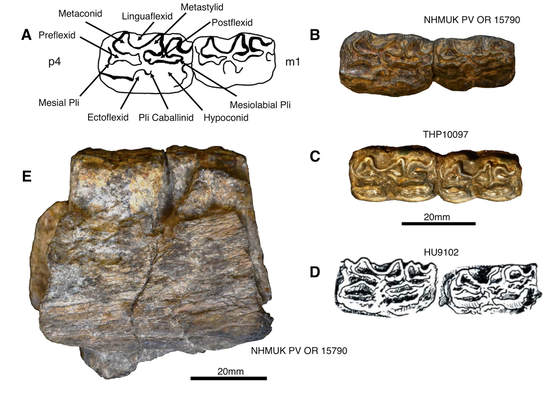 Comparison of the new specimen of Plesiohipparion huangheense with Chinese and Turkish specimens. a) Line drawing of NHMUK PV OR 15790 with morphological features labeled. b) NHMUK PV OR 15790 occlusal view. c) THP10097 occlusal view. d) HU9102 occlusal view modified from Bernor & Lipscomb (1991). e) NHMUK PV OR 15790 labial view.
Horses have inhabited the Indian subcontinent from the Miocene to the present. I am part of a collaborative project with Dr. Ray Bernor of Howard University to understand the systematics and biogeography of Pliocene hipparionine horses, and the early evolution of the genus Equus in the Old World.

Using museum collections, we have shown that a major turnover occurred in hipparionines in South Asia during the Latest Miocene and Earliest Pliocene whereby the Sivalhippus lineage was replaced by Cremohipparion, Plesiohipparion and Eurygnathohippus in the Late Pliocene. We also show that there was a radiation of Equus in the Old World starting ~2.6 million years ago after the dispersal of Equus simplicidens from North America, and Grevy's Zebra likely descended from this radiation.

Taxonomy and biogeography of Indian deinotheres 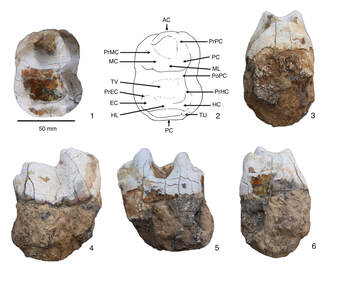 Using a new deinothere dental material from Kutch in western India, colleagues from India and I reassessed dental apomorphies associated with Indian deinotheres, and report on the first occurrence of Deinotherium indicum from the region. This study has implications for the evolutionary replacement, taxonomy, and biogeography of South Asian deinotheres. 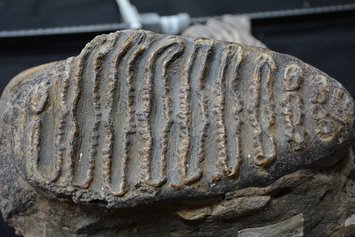 Elephas hysudicus third upper molar from the Pinjor zone of the Upper Siwaliks of India
Elephantids first appear in the Indian Subcontinent in the Pliocene, with Elephas planifrons. This is a long ranging species which extends from roughly 3.6Ma to 0.6Ma. Subsequently, around 2.7Ma, another species appears, Elephas hysudricus, which is suggested to be the ancestor of the modern Asian elephant Elephas maximus. The exact stratigraphic range of E. hysudricus is unclear, but definitive remains have been found from 2.7Ma to 0.6Ma. Another species, Elephas platycephalus has been documented in the Siwalik hills, with a suggested age range of 2.0-0.6Ma. From the middle Pleistocene to the late Pleistocene, the enormous Palaeoloxodon namadicus is found in the Indian peninsular region, along with a species of Elephas that could be a late stage E. hysudricus or E. maximus.

The goal of this study is to quantify the variation in the dental morphology of the these species through time in an effort to understand dental evolution in conjunction to climate and habitat change. I am collaborating with Dr. Adrian Lister, from the Natural History Museum, London. 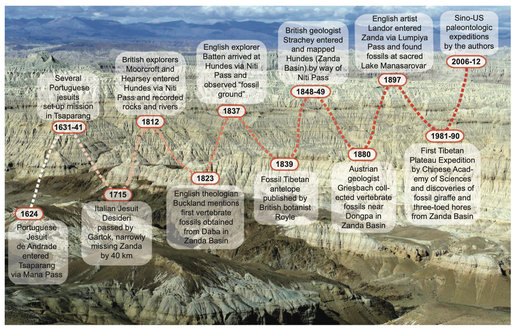 I am broadly interested in the history of fossil collecting in South Asia, with an emphasis on fossil mammals. 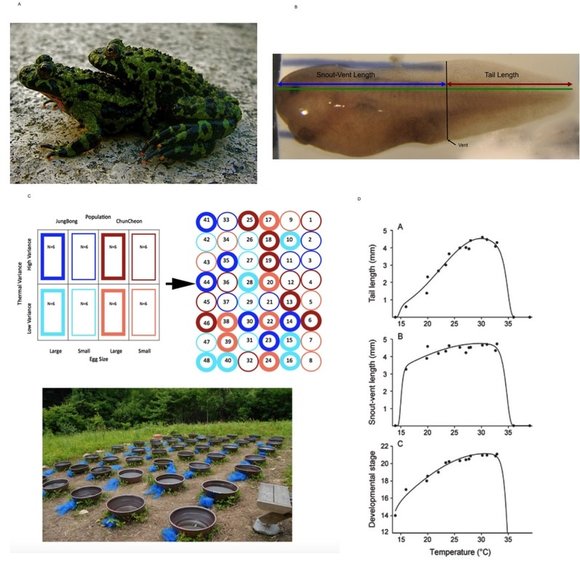